​​ADVOCATING AND AMPLIFYING THE VOICE OF THE ROHINGYA WITH INTERNATIONAL ORGANIZATIONS, GOVERNMENTS, CORPORATIONS, AND CIVIL SOCIETY.

The Rohingya are a Muslim minority group from the northern Rakhine State in western Burma.  Despite having lived in Burma for generations, the Rohingya are considered “foreigners” by the Burmese government.

The Burmese government has isolated the 1.3 million Rohingya in Burma. Burma’s 1982 Citizenship Act denies the Rohingya people citizenship. They are limited in their rights to marry, have children, work, obtain healthcare, and go to school.

Fleeing violence, over 140,000 Rohingya live in what many describe as “concentration camps” where they face severe restrictions and are denied basic necessities including medical care. Since 2012, an estimated 100,000 Rohingya have fled Burma by boat. Apart from the risk of drowning, many of those who flee fall into the hands of human traffickers, and are forced to work on rubber plantations or in the sex trade.

Ultranationalist groups in Burma have also dehumanized the Rohingya through rampant hate speech. This demonization of the Rohingya, coupled with the government’s denial of their rights, has created an environment in Burma that, according to the United States Holocaust Memorial Museum, puts the Rohingya at grave risk of mass atrocities and even genocide. 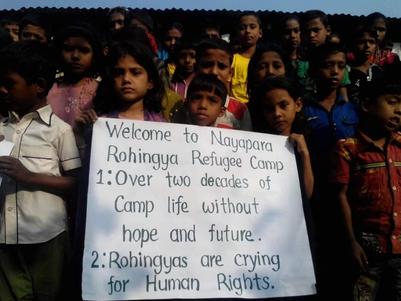 international campaign for the rohingya